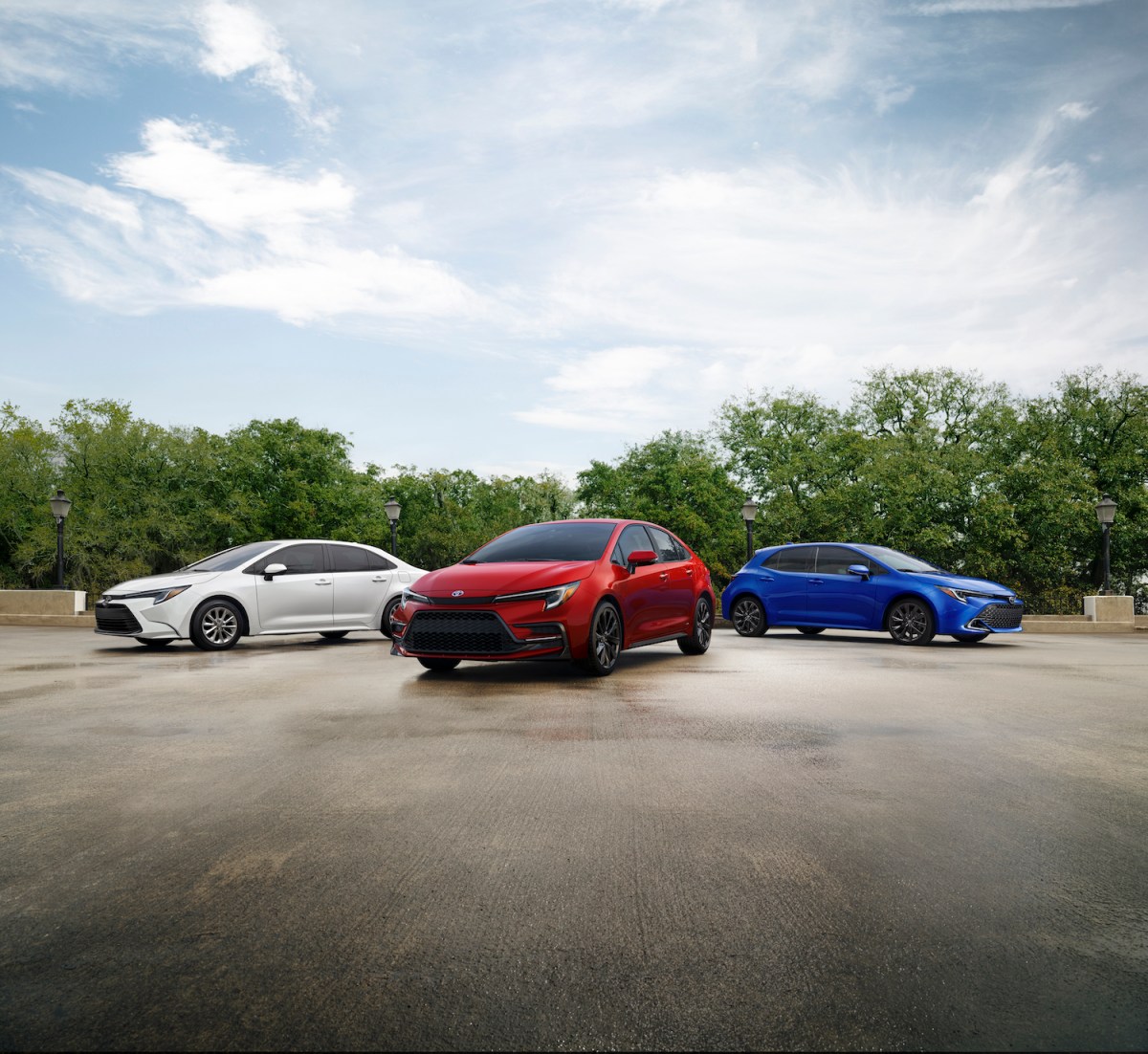 Toyota’s compact sedan is the cheapest new Toyota model on the market. It continues the changes for the 12th generation Corolla which came out during the 2020 model year.

The 2023 Corolla is available in four trim levels: base LE, SE, XLE and XSE. All models are powered by a 2.0-liter four-cylinder engine producing 169 horsepower and 151 lb-ft of torque. The basic model offers you many features. At least an 8-inch touchscreen infotainment system, wireless Apple CarPlay and Android Auto, Wi-Fi access, cloud-based navigation and simultaneous Bluetooth connectivity are included. Higher trim levels get you features like heated front seats, a sunroof, and a premium audio system.

Every Corolla model is equipped with Toyota’s Safety Sense suite of driver aids. Adaptive cruise control, lane keeping, lane departure mitigation and forward collision mitigation are all standard. Appraisers at Edmunds highlight the great fuel economy – a combined 34 miles per gallon (mpg) – but knock it for the lack of headroom and sluggish acceleration.

The iconic hybrid offers some of the best fuel economy of any car on the market at over 50 mpg combined for most trims. For the 2022 model, five versions are available: the base L Eco, LE, XLE, Nightshade Edition and Limited. All-wheel drive is available for LE, XLE and Nightshade Edition trims.

All 2022 Prius models have a 1.8-liter four-cylinder engine paired with a 90 kW hybrid powertrain to generate 121 total horsepower. Standard features on all trims include a Wi-Fi hotspot, heated side mirrors, at least a 7-inch touchscreen, a six-speaker audio system, and Toyota’s Safety Sense 2.0. Top trims include features like heated seats, wireless charging, and leatherette seats. The Nightshade Edition adds black painted wheels and trim elements.

Toyota’s midsize sedan was the best-selling Toyota car in 2021, according to data from Best Selling Cars. Over 313,000 models were sold that year. The 2023 Camry continues the eighth generation first introduced in 2018. Six trim levels are available for 2023: the base LE, SE, SE Nightshade, XSE, XLE and TRD.

A 2.5-liter inline-four engine is standard for all trims except the TRD. It generates 203 horsepower and 184 lb-ft of torque and those numbers go up to 206 and 186 for the XLE. This engine averages 32 mpg combined (31 on the XLE). A 3.5-liter V6 producing 301 horsepower and 267 lb-ft of torque is standard on the TRD and optional on XSE and XLE trims. It gets a combined 25 mpg. All four-cylinder engines have optional all-wheel drive.

Car and driver and TrueCar rank the Camry fourth among midsize sedans on the market. The former says Toyota’s sedan is far from thrilling to drive, but the safety features, fuel-efficient engines and roomy interior make it a great daily driver. Edmunds’ reviewers have similar praise, pointing to the Toyota model’s spaciousness, easy steering and visibility, and safety aids. But they also beat the Camry for engine noise with the four-cylinder and wind and road noise at highway speeds.

The 2022 model continues the fifth generation of the Toyota SUV introduced in 2019. There are six trim levels available for the 2022 model: Base LE, XLE, XLE Premium, Adventure, Limited and TRD Off Road. All models are powered by the same 2.5-liter inline-four engine found in the Camry. Front-wheel drive is standard, except for the Adventure and TRD Off Road versions which have all-wheel drive.

All models of the Toyota SUV are equipped with at least a 7-inch touchscreen infotainment system connected to Apple CarPlay and Android Auto as well as a six-speaker audio system. Toyota Safety Sense is standard on all trims. Top trim options include features like a sunroof, leatherette, fender flares, or a premium 11-speaker JBL audio system.

Car and Driver ranks the RAV4 eighth in its compact SUV ranking. Critics slap the RAV4 for the engine noise and “spartan” characteristics of the base model. But reviewers there and from Edmunds praise the Toyota model for the cargo and passenger space, comfortable ride, and easy-to-use controls.

The 2023 Toyota Tacoma is the latest edition of the brand’s best-selling truck. American News reports that more than 53,000 Tacomas were sold in the first quarter of 2022. Toyota’s best truck is available in six trim options: the base SR, SR5, TRD Sport, TRD Off-Road, Limited and TRD Pro. A 2.7-liter four-cylinder engine powers the SR and SR5 with 159 horsepower and 180 lb-ft of torque. All other versions are powered by a 3.5-liter V6 developing 278 horsepower and 265 lb-ft of torque.

Car and Driver ranks the Tacoma seventh in its ranking of the best midsize trucks on the market. It’s year eight of the Tacoma’s third generation and reviewers say its standard specs are getting “a little dusty.” The base engine is the least powerful in the segment and its poor fuel economy (21 mpg combined at best) knocks it down the list. Edmunds’ reviewers praise the Toyota truck’s off-road capabilities and the manual option for the V6, but knock it for steering feedback and tall step height compared to other trucks.

The GR86 is Toyota’s newest model on the list, but it quickly made quite an impression. Car and Driver ranks it ahead of the Subaru BRZ and the iconic Mazda MX-5 Miata among compact coupes. The three versions – the Base, the Premium and the Special Edition – are all powered by a 2.4-liter four-cylinder engine generating 228 horsepower and 184 lb-ft of torque. That’s good for 22 mpg combined with options for a six-speed manual or a six-speed automatic.

Car and Driver reviews praise the GR86 as its “most improved sports car” thanks to an upgraded engine for the latest generation and excellent balance and steering. It’s a “fun ride no matter where you go”. Edmunds reviewers offer similar praise, appreciating the handling, power, manual transmission and driver-friendly interior. Both point to interior noise and small rear seats as the few downsides.

7. What is Toyota’s cheapest model?

The cheapest Toyota model on offer is the Corolla compact sedan. A base model Corolla is one of the cheapest new cars on the market. But another $6,000 to $7,000 budget increase can give the RAV4 plenty of passenger room, utility with the Tacoma, or driving fun with the GR86.

RELATED: What is Toyota’s cheapest car?