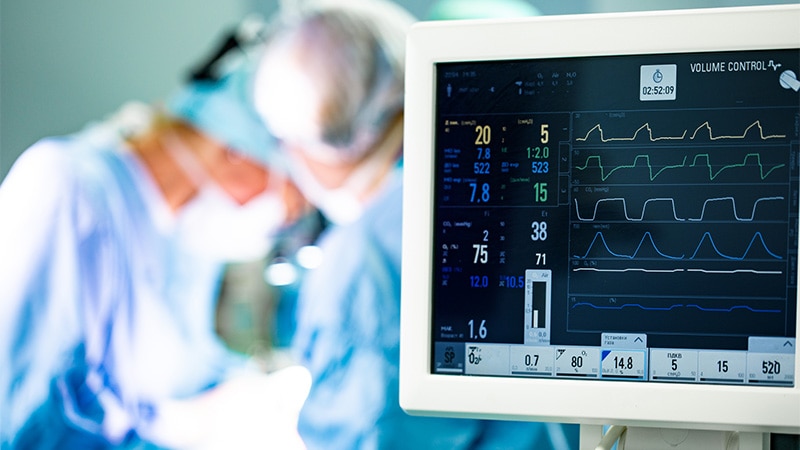 The practice has back and forth on whether atrial fibrillation (AF) should be considered in the preoperative cardiovascular (CV) risk assessment of patients undergoing non-cardiac surgery, and the index of Revised Cardiac Risk (RCRI), currently widely used as an assessment tool, does not include arrhythmia.

But accounting for pre-existing AF with RCRI predicted 30-day mortality more strongly than RCRI alone in an analysis of data covering several million patients scheduled for such procedures.

Indeed, AF has emerged as an important and independent risk factor for a number of poor postoperative outcomes. Mortality in the month following the procedure increased by approximately 30% for patients with AF before non-cardiac surgery. Their 30-day risks of stroke and hospitalization for heart failure similarly increased.

Adding AF to CPR significantly improved its ability to discriminate 30-day postoperative risk levels independent of age, gender and type of non-cardiac surgery, said Amgad Mentias, MD, Cleveland Clinic, Cleveland , Ohio. lecoeur.org | Medscape Cardiology. And “he was able to correctly classify patients as high risk, if AF was there, and he was able to classify some patients as lower risk if there wasn’t.”

“I think [the findings] are compelling evidence that atrial fib should at least be part of the thought process of the surgical team and the medical team caring for the patient,” said Mentias, who is the lead author of the study published today. today in the Journal of the American College of Cardiologywith lead author Sameer Prasada, MD, also of the Cleveland Clinic.

The findings “call for the incorporation of AF as a risk factor in perioperative risk scores for cardiovascular morbidity and mortality,” the published report states.

Supraventricular arrhythmias were part of the Goldman Risk Index once widely used preoperatively to assess cardiac risk before the practice adopted RCRI in the past decade, observe Anne B. Curtis, MD, and Sai Krishna C. Korada, MD, University at Buffalo, Buffalo, New York, in an accompanying editorial.

The current results “demonstrate improved prediction of adverse post-surgical outcomes” by supplementing RCRI with FA, they write. Given the associations between pre-existing AF and serious cardiac events, “it is time to ‘revisit’ the RCRI and recognize the importance of AF in predicting adverse outcomes” after non-cardiac surgery.

The new discoveries, however, are not all straightforward. In a finding that remains a bit of a puzzle, the postoperative risk of myocardial infarction (MI) in patients with pre-existing AF went in the opposite direction of the risk of death and other CV outcomes, dropping by nearly 20%.

This is “difficult to explain with the available data”, says the report, but “the use of anticoagulation, whether oral or parenteral (as a bridge treatment in the perioperative period), is a plausible explanation” given the frequent role of thrombosis in triggering MI.

Consistent with such a mechanism, according to the group, the reduction in the risk of MI was observed mainly in patients with AF and CHA.2DS2-VASc score of 2 or more – i.e. people most at risk of stroke and therefore most likely to be on oral anticoagulation. Reduction in the risk of myocardial infarction was not observed in these patients with CHA2DS2-VASc score of 0 or 1.

“I think that’s part of the explanation, that anticoagulation can reduce the risk of myocardial infarction. But it’s not the whole explanation,” Mentias said in an interview. If this was the only mechanism, he said, then the same oral anticoagulation that protected against myocardial infarction should also have reduced the risk of postoperative stroke. However, this risk increased by 40% in patients with pre-existing AF.

The analysis began with 8.6 million Medicare patients with planned non-cardiac surgery seen from 2015 to 2019, 16.4% of whom had pre-existing AF. Propensity matching for demographics, urgency, and type of surgery, CHA2DS2-The VASc score and the RCRI index created two cohorts for comparison: 1.13 million patients with and 1.92 million without pre-existing AF.

Pre-existing AF was associated with a higher risk of 30-day death from any cause, the primary endpoint: 8.3% versus 5.8% for people without AF (P

Corresponding 30-day OR for other events, all significant to P

The study has the limitations of most retrospective cohort analyses. Other limitations, the report notes, include lack of information on antiarrhythmic drugs given during hospitalization or type of AF.

“That’s not always the case, but that’s the notion. So presumably people with persistent or permanent atrial fib would have more advanced heart disease, and that might imply more risk. But we didn’t have not that kind of data.”

Mentias and Prasada report no relevant financial relationship; disclosures for other authors are in the report. Curtis reveals having served on advisory boards for Abbott, Janssen Pharmaceuticals, Sanofi and Milestone Pharmaceuticals; receive honoraria to speak about Medtronic and Zoll; and serve on a data oversight board for Medtronic. Korada reports that he has no relevant financial relationship.

What is a smart speaker?