By Christopher Stevens for the Daily Mail

A mum, dad and their two teenage boys from Manchester are on sun loungers by the pool of a high-rise hotel, bickering.

The adults are hungover after a night out at karaoke and the children are cowering in embarrassment. Benidorm fans know the scene by heart. At any moment, Nan will show up on her mobility scooter, cigarette in her mouth and skin like sanded leather, demanding a rum cocktail with a dirty name.

No comeback (ITV) is not Benidorm. Despite the non-stop sun, it is cool. Sheridan Smith, in her third major role of the year, plays a talkative, hot-tempered woman whose family is woken from their Turkish hotel beds at dawn by police with machine guns.

They handcuff 16-year-old son Noah (Louis Ashbourne Serkis) and drag him to the police station. Unable to speak Turkish, parents Kathy and Martin (Michael Jibson) are treated like criminals until they agree to hire a lawyer – who tells them that Noah has been accused of sexually assaulting a young boy. 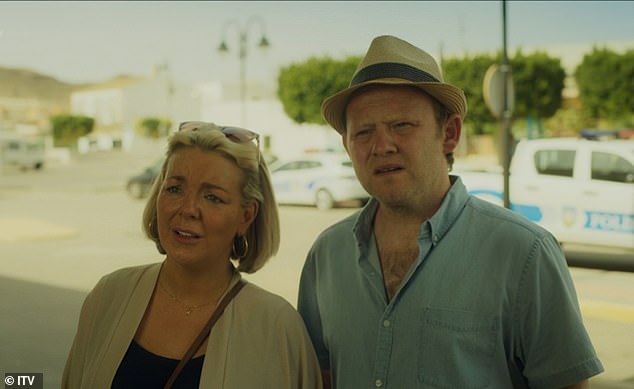 Sheridan Smith, in her third major role of the year, plays a talkative, hot-tempered woman whose family are woken from their Turkish hotel beds at dawn by police with machine guns

The editing stinks of police corruption. When barrister Rico (Philip Arditti) shows up in his sunglasses and Miami Vice swagger, he offers the detectives a £5,000 bribe: “We’re doing what we’re doing to free him. Okay?’

Sheridan, who played an alcoholic teacher accused of sexual assault herself on C5 last week, and who will be a judge this Saturday on ITV’s singing competition Starstruck, is superb in roles like this.

She can be cheeky, angry, and sharp-elbowed, never afraid to go overboard and make viewers dislike her. In one scene, railing at another holidaymaker for not giving information to police, she spat at the woman’s feet.

But from the moment Rico showed up in his blue BMW, with Thin Lizzy blasting out of the speakers, Sheridan had competition. The lawyer fights to steal every scene and he has the best lines. Announcing that Noah was now in jail, he said: “He will be in a youth facility. We hope there will be no killers or lunatics.

And summing up the plot, he added, “You’re not on vacation anymore. This is hell.’

ACT OF DISAPPEARANCE OF THE NIGHT:

Tiggy (Phoebe Nicholls) helped her son get a “French outing” from a party at Chloe (BBC1).

I had to look up the phrase – it means leaving without saying goodbye. The French have their own saying: Filer à l’Anglaise or “leave like the English”.

The art historian Bendor Grosvenor treated himself to a vacation on Britain’s Lost Masterpieces (BBC4). On the slightest apology, following in the footsteps of the 18th century portrait painter Sir Joshua Reynolds, he felt compelled to visit Rome.

Reynolds was inspired by a Vatican statue known as Apollo Belvedere. In a small souvenir shop, Bendor bought a plastic replica for his research. This Apollo had no connection with the painting he was investigating, a half-finished study of a Georgian society lady.

The segment added nothing to the story. There couldn’t be a better example of an unnecessary happy BBC, at the expense of license payers. Also spoiled was presenter Emma Dabiri’s travels, exploring the story of famous singer Elizabeth Linley – as the painting turned out to be someone else’s entirely.

Emma’s wild goose chase must have taken a while to film, as she went through five different hairstyles, from corkscrew curls to topknot to mega-halo. It was quite disconcerting.

The guy who stood out the most was Elizabeth’s husband, Irish playwright Richard Brinsley Sheridan, author of The Rivals. It had no connection to the story. Yet he was roped in, just so a historian could dismiss him as “a fool.” It seems rather harsh.

Your approach to the TSPSC Group-1 Mains Examination