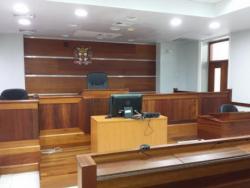 Andre Ruddock, who is charged with the murder of a woman at Pathways International’s Kingdom Restoration Department in St James, is said to have confessed to the murder.

The Home Circuit Court was told this morning that Ruddock allegedly confessed in a warning statement to police in the presence of two justices of the peace on October 18, a day after the alleged incident.

This was revealed by senior prosecutor, Director of Public Prosecutions Paula Llewellyn, this morning.

Ruddock is charged with the murder of Taneka Gardner, 39, in an alleged sacrificial ritual at Pathways International on October 17.

He is represented by lawyers Anthony Williams and Venice Brown.

Almost an hour of damning allegations have been read by the Crown.

Among other things, the court heard that Ruddock had been ordained by head church pastor Kevin O. Smith as the angel Gabriel on the night of the murder.

It was reported that worshipers were to come to church dressed in all white for a special service as they were told they would be embarking on a heavenly journey aboard an ark.

It is alleged that Smith told a devotee to slit Gardner’s throat.

It is further alleged that when the person refused to carry out the instructions, Ruddock took the knife and slit the woman’s throat.

The court ordered this morning that a psychiatrist report be made on the accused.

Ruddock has been remanded in custody again and is scheduled to appear in court again on December 7.

Ruddock was charged last week Monday after being transferred from St James to Kingston.

Smith, who died in a car crash last Monday, was to be charged with two counts of murder, two counts of intentional injury and one count of unlawful possession of a firearm.