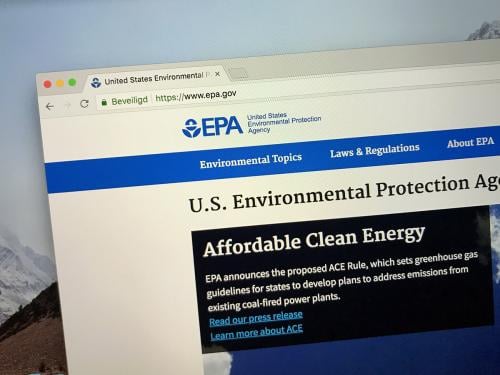 On April 6, 2022, the U.S. Environmental Protection Agency (EPA) hosted a webinar on “New chemical risk management actions under TSCA.” As noted in our January 24, 2022 blog post, in January 2022, EPA announcement an effort to streamline consideration of new bio-based or waste-derived chemicals that could replace current transportation fuels that emit more greenhouse gases (GHGs). The EPA states that to support this effort, it offers outreach and training activities to stakeholders interested in biofuels. According to the EPA, the webinar series includes reviewing requirements under the Toxic Substances Control Act (TSCA), outlining simplified approaches to risk assessment and risk management measures, and providing information on how to navigate the New Chemicals Prefabrication Notice (PMN) process.

Jim Alwood, EPA, reviewed the five decisions made by the EPA and the risk management options for each:

Alwood reviewed the Significant New Use Rules (SNURs), which identify a potential new use of a chemical as a “significant new use”. If a chemical is subject to a SNUR, anyone intending to manufacture, import, and/or process the chemical for a significant new use must notify EPA at least 90 days prior to begin this new use by submitting a Significant New Use Notice (SNUN). EPA must review the SNUN and make one of the five decisions described above. Alwood emphasized that a SNUR is not a ban or restriction on the use of a chemical, but acknowledged that it may not look that way and may appear to be a restriction. The EPA uses SNURs to review new uses where the uses may create concerns by changing human or environmental exposure to these chemicals.

Alwood said the EPA does not need to determine risk to issue a SNUR; it only has to determine if the use in the PMN can change. TSCA requires the EPA to consider:

Alwood said TSCA consent orders only apply to the PMN bidder, and a SNUR extends the consent order restrictions to other manufacturers, importers and processors to ensure a level playing field. Under the Lautenberg Act, the EPA must consider issuing a SNUR after issuing a consent order under TSCA Section 5(e). If the EPA does not issue a SNUR, it must explain why it did not. EPA will include consent order exemptions and exclusions in the SNUR. According to Alwood, the EPA only receives ten to fifteen SNURs a year, not many.

Alwood noted that for most biofuel consent orders, the EPA will have skin protection requirements.

During the question and answer session, Alwood said the EPA has completed the review process for two biofuel NMPs, and there are more in the pipeline. If the TSCA Hotline cannot answer a question regarding a PMN, it will direct the caller to the New Chemicals Program. When asked how anyone next to the PMN proponent will know what uses the EPA has assessed, Alwood replied that if the PMN proponent has not claimed the use as confidential, they will include it in the Federal Register notice. According to Alwood, the EPA tries to do its best to ensure that the requirements everyone must follow are not confidential. Alwood received a question asking how processors know what requirements apply to them when using the chemical as intended. Alwood said there is language in consent orders requiring the PMN issuer to inform customers of the requirements of the consent order. SNUR regulations require companies to inform their customers of the existence of a SNUR. Alwood noted that while there is a Biofuels Review Team, stakeholders may have heard that the EPA is struggling to meet the 90-day PMN review period for any chemical. . The EPA determines which uses of a chemical are foreseeable through literature searches, patent searches, and searches of its PMN database for similar PMNs it has reviewed. Although there is no time frame within which the EPA must issue a SNUR after signing a consent order under TSCA Section 5(e), Alwood noted that it is within the EPA’s interest in issuing the SNUR as soon as possible. Under the Lautenberg Act, the EPA does not consider the replacement benefits of a PMN substance and instead evaluates a new chemical substance, including a biofuel, solely on its conditions of use. According to Alwood, the EPA may consider alternative benefits at the risk management stage.

The EPA is to be commended for presenting a well-organized and helpful webinar. The EPA is also to be commended for creating an innovative program designed to streamline the review of new bio-based or waste-derived chemicals that could replace current, more GHG-emitting transportation fuels. Biofuels stakeholders are encouraged to take advantage of EPA’s outreach and training efforts.