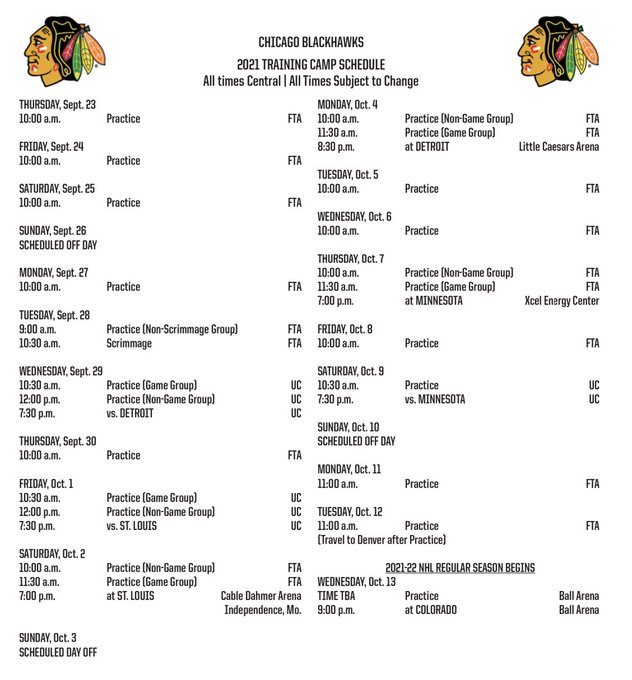 The Blackhawks lost both games to the Wild at the inaugural Tom Kurvers Prospect Showcase last weekend in St. Paul, Minnesota. Each match was tied towards the end before Marco Rossi scored the regulation winner of Match 1 and Nick Swaney scored the shootout winner of Match 2.

While Lukas Reichel was fun to watch and demonstrated why he was worthy of a 1st round selection, Michal Teply was the Hawks’ best forward in both games. On the blue line, Jakub Galvas was the most consistent showing his 5 years of professional experience in Europe.

* Each team was allowed to dress an additional skater. In Game 1, the Hawks dressed 7 defensemen and the usual 12 forwards.

* Arvid Soderblom played the entire match between pipes for Chicago.

There was confusion among everyone over which PK unit to cover and where to be due to focusing too much on the puck rather than focusing on defending a certain player or region.

DJ Busdeker received an escape pass from Nolan Allan and took it from the distant blue line, then skated against 4 defenders and parted the Red Sea with a blistering shot that cheated the Wild Hunter Jones goalie.

Reichel kept the puck in the zone with a quick and shrewd movement to bring it to Evan Barratt who came down low in the corner before giving Teply in the lunge. Teply converted a quick photo.

Isaak Phillips held the puck too long at his blue line instead of pushing it deep. Osipov and Regula were caught looking at the puck rather than having one pick up the puck carrier and the other pick up the trailer.

Ryan O’Rourke took advantage of a point shot to register the eventual winner of the game after benefitting from a quick passing streak from his teammates as they mostly overloaded the left side of the area.

* Again, each team was allowed to dress an additional skater. In Game 2, the Hawks went for 13 forwards and the 6 standard defenders.

* Osipov and Regula remained captain and substitute respectively, but Barratt wore the other A instead of Hardman.

* Cale Morris and Tom Aubrun shared the duties of goalkeeper.

* Game 2 was noticeably faster with loads of hard hits and low blows, as well as fights featuring Barratt and Osipov in the same scrum.

Hardman landed a hit to force a turnaround that landed on the stick of Andrei Altybarmakian who made his way past a defenseman in the right circle then streaked the puck past 3 others and the goalie.

Matt Boldy took Allan’s pocket and headed for the net, creating a rebound chance for Rossi. Reichel and Allan fail to pick up Rossi as they turn their backs on developing play as they watch the puck.

After some back-and-forth from the two teams, Jakub Pour carried the puck to the left wing, then spotted Barratt who deftly tapped the pass as he walked through the Minnesota defensive gate.

Aubrun tried to smother the free puck on the goal line, but Boldy hit it as Josiah Slavin and Phillips tried to help freeze while Barratt was knocked down on his keister earlier in the shift .

Reichel circled the puck in the left circle and connected with a wide-open Teply on a backdoor goal. This was one of the many instances in both matches where Reichel and Teply teamed up to score chances.

The Wild forced overtime after a quick pass ended with a Rossi shot from the right circle with 4 seconds left. Rossi and Boldy were dangerous throughout the show individually and as a duo.

* Teply looks a lot stronger this season as he’s been impressive engaging in all areas, rolling the puck with his increased strength to fend off defenders, and being brave to show up in the paint.

* Galvas played safely and reliably at his end thanks to solid foundations, simple games, patience and evasion.

* Pour has been convincing as a possible training camp dark horse after proving he drives and smashes into the net, blocks shots, throws weight, and balances under pressure.

* Reichel has consistently backed down and displayed top notch offensive ability with his sublime vision, creativity, liveliness and willingness to cross traffic and bring the puck to the net.

* Colton Dach needed to park more in the crease and wreak havoc, but he really enjoys shooting although a lot of them are duds.

* Allan lived up to a home defenseman’s bill with an advantage while still being good enough at moving the puck and sending shots to the net.

* Regula executed clean passes when he had the time and space, but he struggled when he didn’t have that luxury; its ability to maneuver under pressure is a work in progress.

* Hardman threw his weight off and ended his failures with regularity as a heavy forward failure.

* Barratt created an attack either by making play or by getting in position to receive passes for quick shots.

* Hardman, Barratt and Altybarmakian played with a lot of sandpaper.

* Slavin was a more tamed version of Hardman as a heavy chess-forward who is more industrious than physical.

* Jaden Luypen is noticeable quarter after quarter with his leap and energy to roll up his sleeves and get his hands dirty.

* Carson Gicewicz was quietly effective in forward check and shorthandedness, closing time and space and wielding an active stick.

* Louis Crevier, Ethan Del Mastro, Allan, Phillips and even Galvas were all ready to make a physical commitment.

* Crevier is like Regula in that he is sloppy when under pressure but uses his long range to his advantage when defending.

* Chad Yetman, Kale Howarth and Michael Krutil as well as Busdeker and Del Mastro have had their moments but need a lot of time on the farm (or in the juniors in the case of Del Mastro).

* Osipov demonstrated why he is a career minor leaguer because he could barely connect on his passes.

Blackhawks training camp opens this Thursday, September 23. There is an intra-team scrum on Tuesday, September 28, then the first preseason game will be played the following night against the Red Wings in Detroit. The season opener is Oct. 13 against the Avalanche in Denver.

After 662 games in the League, for a long time @ Senators forward Zack Smith (@ Smit_Treat15) announced his retirement.

Congratulations on a great career! ?? pic.twitter.com/GQi06Yy7mk

Not really recent news and some would say it’s not really news at all.

See you soon on the boards!

Investing in stocks: five steps to assess which stock to bet on