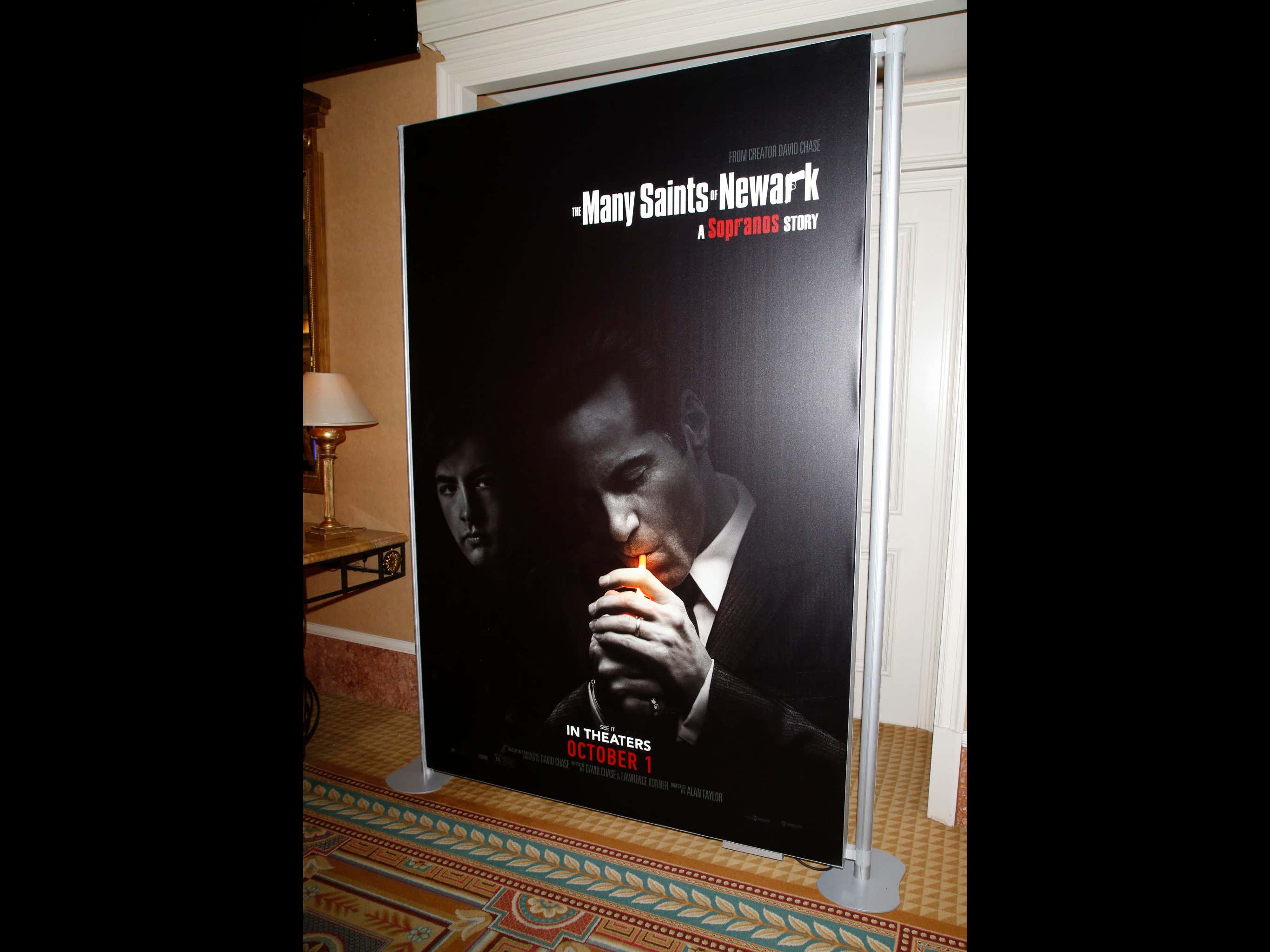 The kickoff of the movie was pretty cool and there’s no 2 ways around that. It was great walking through the graveyard with other deceased people telling stories about their whereabouts only to end up at Chrissy detailing how he died at Tony’s hands. We then met the film’s obvious lead character in Dickie Moltisanti as he went to pick up his Hollywood father Dick (Shoutout Ray Liotta) with his new wife from Italy, Giuseppina. We then meet the character of Leslie Odom Jr in Harold who I would say was definitely the main character in the movie aside from Dickie. He was an amazing villain if you could even call him one considering he had a beef with Dickie who was very clearly a world class trash bag. The main focus for the first half hour or so is the Newark Race Riots of 1967 which resulted in Harold starting to confront the Italians after he moved south and then returned to Jersey. More on that later.

It was then time to meet the whole team that we were obviously all looking forward to. They were at Janice’s fucking confirmation so we first saw Johnny Boy, Livia, Pussy and Silvio in which the local pastor is quite shocked when he sits at a table with a man named Pussy. And then, soprano-style, before we even knew it, Dickie was punching his dad’s new wife after killing Hollywood Dick for being a big jerk to Giuseppina. After that Johnny Boy goes to jail which pretty much means this wonderful male model in Dickie becomes Tony’s main father figure for a few years and in the middle of that Dickie goes to visit someone in jail. . We have no idea who it is until it’s fucking RAY LIOTTA again! What a moment! It turns out that Hollywood Dick has a brother and he became Dickie’s Melfi for the rest of the movie.

Next thing we know is Tony is hosting a numbers game at school. Just beautiful things. Basically like seeing Hank Aaron hit a little league home run. And then before we knew it, we had a time jump for the introduction of the wonderful Michael Gandolfini on the day Johnny Boy comes home from prison. This scene was interesting because we really had the first time we had Livia being Livia, Junior dropping that Tony doesn’t have the makings of a varsity athlete, and baby Chrissy crying when he sees Tony only for an old lady at the table to say “Some babies come into the world know all kinds of things on the other side.” A little scary. It was then time to see Tony become something of a Robinhood milkman as he, Tony B, and Jackie Aprile steal an ice cream truck to distribute free ice cream to the kids. He is my boss. This led to one of the best scenes in the IMO movie as Dickie, his wife, Johnny Boy and Livia chat about Tony as Livia is incredibly so overwhelmingly negative about Tony playing football that Johnny Boy pulls his butt off. hair out of frustration.

Harold’s story then accelerated as he returned to Jersey, fully prepared for war on Dickie and co. Not only does he sleep with Giuseppina, but he kills one of Dickie’s guys after a pickup and in response to Dickie, Silvio, Paulie and Pussy torturing Hiccup’s cousin only to reveal that Hiccup acted alone and did not wasn’t another gangster like Angelo Salerno as they thought. This is the recipe for all-out war. The movie then stopped for a bit when Tony moved to the suburbs, which almost got him kicked out of school during a discussion with his guidance counselor before the counselor called Livia to speak to her. alone. They then cut to a real shootout between Dickie and co. & Harold et co. I can confirm that there were casualties. Sad.

The acting then escalated into a scene with Vera Farmiga and Michael Gandolfini as they have a pleasant conversation only to explode as Tony suggests he take some medication. For my money, this was probably the most interesting scene in the movie because it really, really, really reminded you of James Gandolfini and Nancy Marchand. Great scene especially when she let down the patent “poor you”. At the funeral of Joey Diaz’s character, Junior falls into the rain only to make Dickie laugh at him, which will ultimately lead to Dickie’s disappearance. I don’t want to sound mean, but that’s where this movie went downhill. Tony then meets Dickie in a warehouse where he steals JBL speakers from Tony before mentioning our good buddy Hesh. Everyone loves a Hesh mention!

Then it’s time to end the movie in a very cool scene as Hiccup goes down to meet Frank Lucas where he mentions his intention to kill Dickie before Frank offers to help him, so it doesn’t look too hot. for Dickie at this point. We then turn directly into a very tense scene as Dickie and Giuseppina have a lovely romantic day at the beach where we don’t know if Giuseppina could possibly prepare Dickie with Harold just to pledge her allegiance to Dickie as she TELLS. HIM she slept with Harold. Its not the best thing to say to tell a deranged murderer that you fucked his rival !!!! Sadly, it came to an end when Dickie drowned her in the ocean.

As Dickie returns to Ray Liotta to ask for more advice, he tells her to leave Tony out of his life so that he doesn’t get caught up in whatever Dickie does by ignoring him multiple times … even when the poor Tony was trying to get some brewskis for him and Carmela! Horrible uncle! Finally, Dickie agrees to meet Tony at 9am at Holsten’s house only to be killed that night by a guy hired by fucking JUNIOR !!!!! The movie finally ends with everyone at their funeral having Dickie’s (dead) finger locked with Tony as Chrissy goes back to the narrative to say he’s the man he went to hell for.

My apologies if that was too long, but now let’s get into my THOUGHTS on this.

I’m not going to water it down. It was of course NO Goodfellas. It was of course NO redemption from Shawshank. It was certainly NOT Abraham Lincoln Vampire Hunter. It was just fine. I give an A-OK and 3.1 Balls for the first 3/4 of the film. The last half hour can really be a 0 Balls. Having fucking JUNIOR being the man who killed Dickie on top of him by falling down completely INSANE steps. I was stunned. And to top it off, there was that weird fucking breaking of the 4th wall when Dickie’s corpse melds with Tony’s fingerâ€¦ What the real FUCK! So weird that I almost thought it was wrong. All this just to make the fucking uncle Junior be the man behind it. No matter. I need a black memory erase man after seeing this. Not to mention that some of the Easter eggs were a bit too much. Just hearing names we’ve heard of like Hesh and Ercoli mentioned was cool, although some were just too blatant. You can’t be too mad at that, because it’s a prequel, stuff like that is obviously going to happen.

Although I certainly don’t think it was all bad as this last line from Chrissy was really cool since he very blatantly dropped that same line in the series. Silvio was hilarious. The Pussy actor was on point. Billy Magnussen played a damn good Paulie, so it would have been cool to see him a lot more. Seeing Ray Liotta do his classic crowd laugh was a delight. Jon Bernthal was a stallion as always. Vera Farmiga is still just a fucking awesome actress. And of course, Michael Gandolfini was amazing as teenage Tony.

I was also disappointed that there wasn’t a scene of Tony and Jackie stealing Feech La Manna’s deck of cards. If it was a post-credit scene or something, I would have forgotten all of David Chase’s sins for it. A HUGE failure because I know a whole bunch of Sopranos fans really wanted to see this.

All in all, I can watch a few more times, although that ending really bothered me. My jaw is still on the ground and not in a good way. Please excuse me while I am going to be sad. I now leave you with a video of the Sopranos that always makes me smile. Make the most of your weekends.