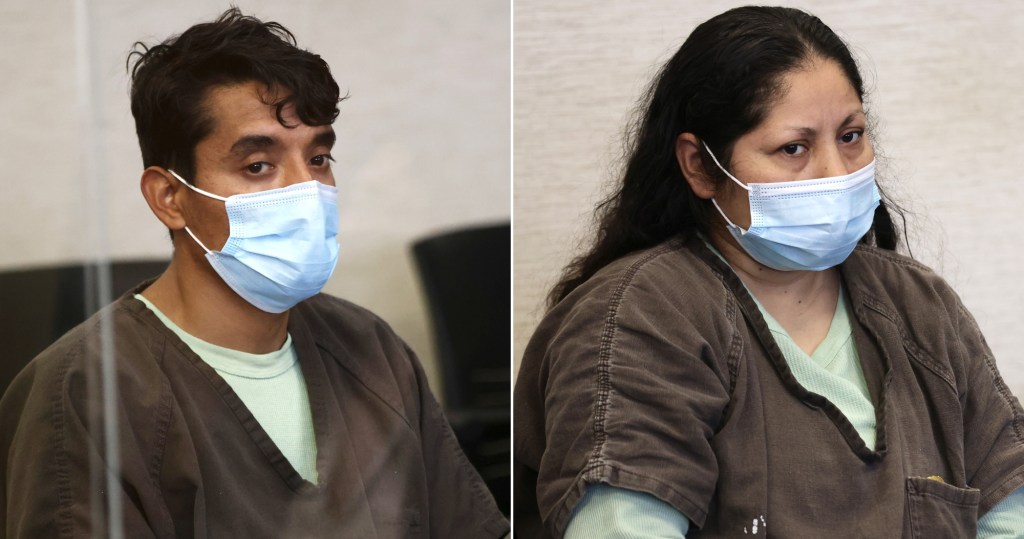 Investigators uncovered a sordid story of love and betrayal behind the April abduction of a baby from San Jose on Tuesday, alleging the woman behind the crime intended to trick her extramarital lover into believing that the baby was theirs.

The robbery of 3-month-old Brandon from an east San Jose apartment – which drew national attention in the 20 hours the baby was missing – came after at least four failed kidnapping attempts and a sabotage incident where the woman and another boyfriend cut the brake lines of the mother’s car, authorities said. Yesenia Guadalupe Ramirez had a simple motivation, prosecutor Rebekah Wise said: She wanted to raise Brandon as her own.

The dramatic story described during a preliminary examination before Judge Nona Klippen led to a startling conclusion. At the end of afternoon testimony, Ramirez, 44, and Jose Roman Portillo, 28, did not contest eight counts of kidnapping, attempted kidnapping, conspiracy, burglary and vehicle tampering.

Klippen had offered Ramirez and Portillo reduced sentences if they pleaded to all charges. Both faced a maximum sentence of 16 years and 4 months. Ramirez was told by the judge that her plea meant she would face no more than 14 years in custody; for Portillo, it would be five years.

The difference comes from evidence that Ramirez was most responsible for the plot and Portillo was a loving accomplice executing his bids. Portillo’s attorney, Deputy Alternate Public Defender Karri Iyama, said the same outside the courthouse.

“He fell in love and followed the wrong woman,” Iyama said, according to NBC Bay Area. “Since then, he has fallen into circumstances that gave rise to this case.”

Attorney Cody Salfen, who represented Ramirez, said “given all the circumstances…it was a reasonable offer” that would “minimize the destruction to his life.”

But Wise said after the hearing that the judge’s offer came over the objection of the district attorney’s office and that she still plans to argue for a harsher sentence.

The main evidence against the two defendants came from cellphone tracking data linking Ramirez and Portillo to previous abduction attempts and the timeline from when Brandon was taken away on the morning of April 25 to when it was picked up by agents acting on a tip about 20 hours later. at Portillo’s apartment in East San Jose.

Police say Portillo grabbed Brandon at his family’s second-floor apartment in San Jose as the baby’s grandmother was unloading groceries and fled, carrying the child in the baby carrier that Portillo had brought for the robbery. Some of these details had previously been provided by San Jose police in statements and court documents.

But what wasn’t made public until this week were details provided by Officer Eduardo Reyes and Detective Catherine Van Brande, who testified that Ramirez had sought to convince one of his boyfriends that Brandon was her baby with her. This boyfriend told police he believed his claims and only realized he had been tricked when he saw the media coverage of the kidnapping. It’s unclear what Ramirez hoped to gain from this lie.

Ramirez is married but separated from her husband. Portillo and the other boyfriend may have been in great company. Van Brande testified that text messages on Ramirez’s phone said “several men believed they had given birth to many children” with her.

Tuesday’s astonishing court testimony also included the account of Brandon’s mother, Jessica Ayala, who said that about four days before the abduction she noticed that her brake lights were not activating.

“I was in the parking lot when I moved it and realized it had no brakes,” she said through a Spanish interpreter.

Ayala said that after asking a mechanic friend to examine his car, he “told me that the vehicle’s brake lines had been cut.”

Adding to the intrigue: Ramirez and Ayala had first met, as Ayala testified on Tuesday, through their mutual attendance at a small Pentecostal church run by a house on South Second Street. This church also faces criminal charges related to a 3-year-old girl who died of asphyxiation last fall during an apparent exorcism. This incident, however, appears to be unrelated to the abduction.

The pair, as the police say, were nothing if not persistent. Their kidnapping attempts began shortly after Brandon’s birth, when Ramirez actively befriended his mother, Ayala, and grandmother, Victoria Mejia, who lived together.

“When my baby was 2 months old, she started hanging out at my house more,” Ayala said. “She would come to my house and tell me that God would tell her that she had to help me, because I was going through a difficult time… She repeatedly brought things for my baby.” The difficult time apparently involved her husband being in jail.

Court documents detail the kidnapping attempts that occurred along the way.

On March 14, the two allegedly went to the apartment where Brandon lived – at a time when Ayala was not there – and said they were child protective services officers in charge of taking custody. of the baby. But the parents who were at the home called the county’s Department of Family and Children’s Services and learned that no such order had been issued.

On April 2, the couple tried but failed to take Brandon to a church service, the documents show.

The two remaining attempts involved efforts to take baby Brandon from Mejia to a Walmart on Story Road during store visits – first on March 28 and then hours before the reported kidnapping on April 25. But investigators say Ramirez and Portillo abandoned those efforts for fear of being caught, either because they didn’t distract the grandmother enough or because they were wary of the impending security cameras.

The day Portillo managed to pick up Brandon, Mejia recalled that Ramirez — who had been visiting the family — was backing her vehicle away from the apartment when she called her that the baby was missing. She said Ramirez stopped and got out and picked up the child.

Ayala testified that when she got back, Ramirez “came to me and told me everything would be fine. Afterwards, she was nervously on her cell (phone) the whole time.