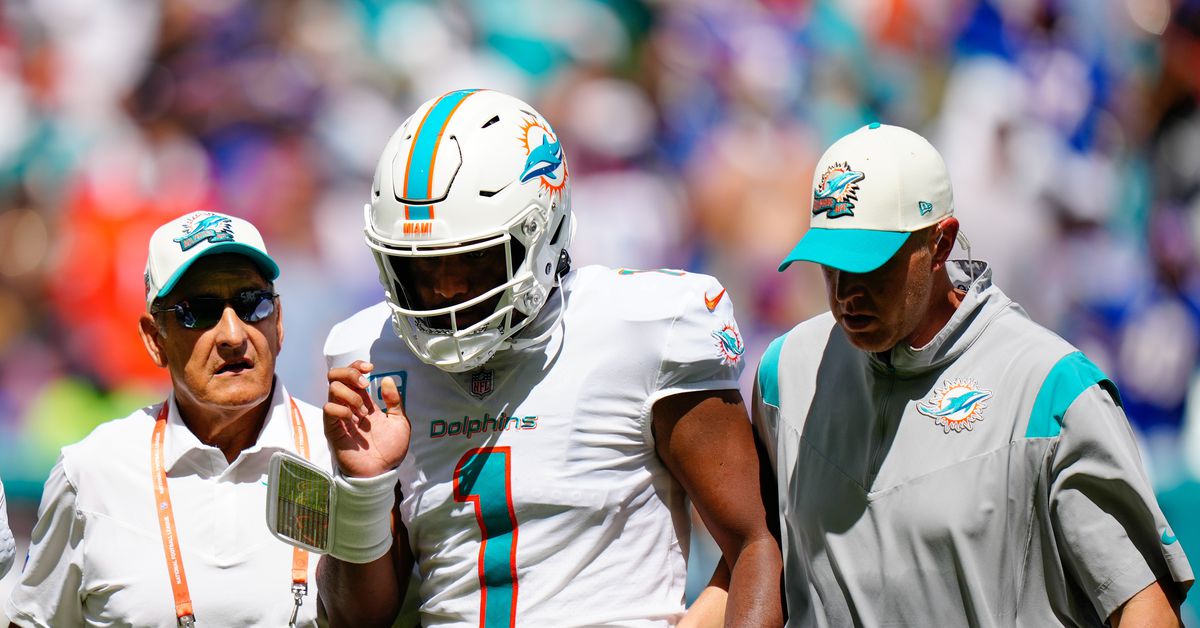 The Buffalo Bills vs. Miami Dolphins matchup might be in the headlines right now thanks to the Butt Punt, but a moment earlier in the game is being questioned by the NFLPA.

In the first half of Miami’s win over the Bills, Dolphins quarterback Tua Tagovailoa attempted a throw to his left while under pressure. He fell to the grass, appearing to hit the back of his helmet on the playing surface. After the play, Tagovailoa was visibly shaken, as he staggered to his feet before falling:

The play drew a roughing penalty from the setter, but Tagovailoa was sent to the locker room for medical evaluation. Tagovailoa was initially listed with a head injury, and as questionable to return:

But he came back, bringing the Dolphins back on the field for the second half. The quarterback played the rest of the way, to the surprise of many. According to Ian Rapoport of the NFL Network, Tagovailoa suffered from a back injury, which allowed him to be shut out at halftime:

My understanding of Tua Tagovailoa’s situation: He twisted his back in the 1st quarter on a stealth shot and didn’t run out of time. After Matt Milano’s kick, his back locked, causing him to wobble. In the locker room for complete concussion control. Fully cleared. Now on the ground.

Fellow NFL Network inside Tom Pelissero crafted to the standards of the concussion protocol in place:

The NFL-NFLPA Concussion Protocol states that gross motor instability means a player cannot return to play if he is “(de)termined by the team physician, in consultation
with UNC (unaffiliated consultant in neurotrauma), of neurological origin.”

In this case, doctors determined that was not the case. https://t.co/rNd5y9qMwV

However, the NFLPA is not satisfied. After the game ended, the NFLPA opened an investigation into the situation and how Tagovailoa was cleared at halftime:

NFLPA launches investigation into treatment of #Dolphins Checking QB Tua Tagovailoa’s concussion in their game against the #Invoices today in Miami, per source.

Under the current collective bargaining agreement, the NFLPA, the NFL Board of Management, or any player themselves have the right to file a complaint regarding a player’s treatment under the concussion protocol:

Under the 2020 CBA, the NFLPA, NFL Management Council, or any player has the right (either independently or collectively) to file a complaint regarding an alleged violation of concussion protocol, which will be investigated and resolved by the union and the management board.

After the game, Tagovailoa and Dolphins head coach Mike McDaniel addressed the situation. According to McDaniel, the quarterback “played with back pain:”

Mike McDaniel reported that Tua Tagovailoa played with back pain/discomfort.

McDaniel said the 45-yard pass to Jaylen Waddle is one he will always remember: “It shows how brave he is, how tough he is.”

Tagovailoa himself indicated that on the play in question, while he hit his head, he first hit his back:

Tua said he felt like his back had been hypertensive. He mentioned that he feels tight now. He said he had his head but thinks he hit his back first.

He had ice on his bag after the game and he noted that they would be testing and coming back tomorrow. They have a fast TNF turnaround in Cincy. https://t.co/iSdQ0Bvaa0

As Cameron Wolfe noted, Tagovailoa had an ice pack on his back after the win.

Still, the NFLPA has the right under the CBA to have the incident reviewed, and according to reports Sunday night, they are making such a request.

How three liberal nonprofits are leading the anti-vaping campaign