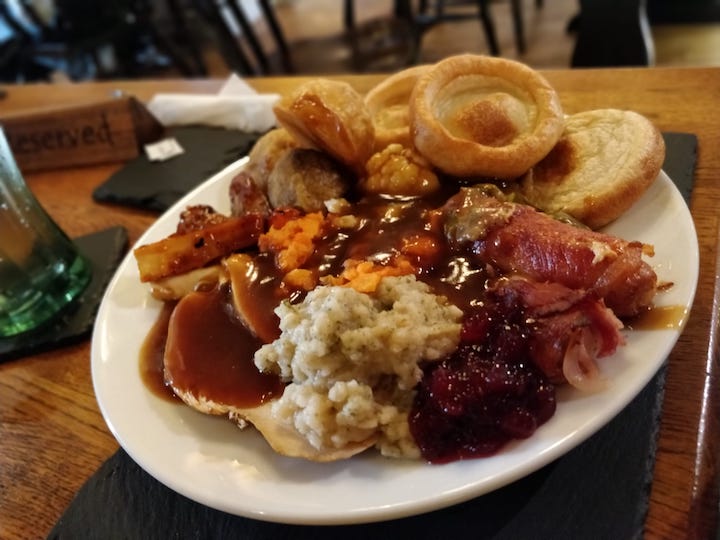 The next restaurant with outdoor seating in Blog Preston’s summer review series is The Blue Anchor in Bretherton, Leyland.

Known for its buffet-style dining room, it also has a huge garden with plenty of tables well scattered among mature trees and bushes.

I took my friend Pauline to try the Sunday Rotisserie, priced at £10.95 pp, having taken care to book a table in advance as it’s very popular.

Customers order at the bar and are given tiny tickets to hand to the rotisserie staff, who then take a plate and ask what kind of meat you would like on it. The choice was shredded roast beef in sauce, roast chicken, ham, pork or turkey.

I first asked for chicken and gammon but changed my mind after I put almost a whole chicken breast on my plate. The helpful member of staff told me that if I wanted another meat later I could just come and ask for it.

In addition to the hot food there was also a salad bar offering staples such as leaves and other healthy foods, although I think I also recorded a pork pie hanging out there shuffling and trying to hide his jelly.

There are two types of customers in the buffet world. The former are those who see a sign in a restaurant that reads “One Trip Only To The Salad Bar,” not caring that there isn’t a “please” appended to the end. They take their little side dish on autopilot and drop a tiny bit of their favorite items on it while chatting with their friends about kittens and charities.

Then there are those who take this rule as a gauntlet thrown down by a capitalist society and will create a tottering structure worthy of a Dr. Seuss character in order to rebel against authority.

Popular techniques include breadstick poles supporting a wall of sliced ​​cucumbers or nachos, then stabilized with rice, pasta or couscous tamped into a concrete. Subsequent layers can be lighter ingredients such as croutons and salad leaves, as long as they are coated with Caesar dressing. RSJ celery sticks are another potential option, but there is always the danger of them being expected to eat them.

As I was there to review the food, I needed to try as many buffets as possible, but since there was a line, I panicked and started throwing stuff in like an amateur . I even forgot to use Yorkshire puddings as sauce pans, which is a particularly shameful mistake for a northerner. Although I only took a bit of everything (except mushrooms because they are hideous creatures), my plate was high enough that I tried to protect it from other diners on the way back to my table .

Fortunately, the list of dishes was displayed on a board, so I could refer to it if anything confused me. My favorites turned out to be the sweet chilli parsnips, shockingly followed by the creamed Brussels sprouts in pepper sauce… sprouts being the UK’s vegetable equivalent to the Eurovision Song Contest.

Many chain cuts feature dried, depressed shards of meat, sparingly chipped by a sad, sweaty teenager. Customers then make their way to the parched accompaniments under a sign that reads “Help Yourself.”

Before sampling the dark array of vegetables, diners might assume the sign was written by management, but seeing the shrunken horcruxes it seems more likely it was a stern warning from a customer. dying man who had taken a razor-sharp garden pea. in the head.

Besides the invitation to return for more meat on top of all the trimmings, what stands out at Blue Anchor is the care and imagination that goes into every side dish. There are no simple boiled vegetables here. Instead, there’s seasoned Cajun cabbage, garlic and tomato potatoes, pan-seared vegetables in black bean sauce, tarragon mushrooms and broccoli, and coleslaw cheese. flower.

Even more impressive, 11 of these 16 dishes were listed on the board as vegan, along with clear information about whether an item contained gluten.

At £10.95 for an adult and £6.95 for children, who also get ice cream, Blue Anchor Meat is exceptional value. For an additional £4, diners can also have their choice of dessert.

Pauline and I opted for the strawberry pavlova, which was disappointing because it consisted of a small deli meringue with a scoop of ice cream, a small dab of cream and three strawberries cut into pieces. I don’t like ice cream and the pavlova isn’t supposed to contain any, so I regretted choosing it over the rhubarb crumble, which was homemade, so probably a much better option.

I will definitely be returning to the Blue Anchor for a Sunday carvery, but next time I will forgo the meat altogether as, as well cooked as it was, the toppings were even better. In fact, any vegan missing a good Sunday dinner should consider doing the same as it’s such great value even without the meat. Don’t forget to book, the Blue Anchor is rightly popular.