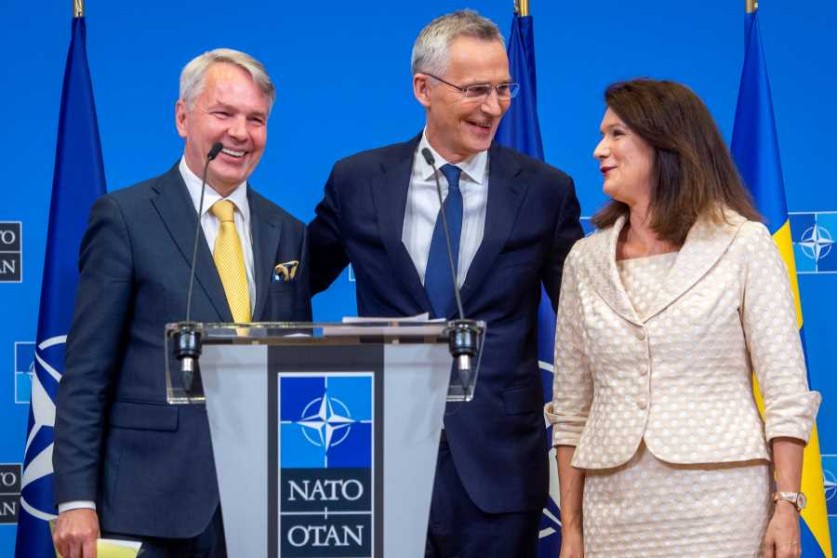 Sweden and Finland take another step towards NATO membership

During a ceremony in Brussels, NATO ambassadors today signed the accession protocols which will bring Finland and Sweden closer to joining the alliance.

NATO Secretary General Jens Stoltenberg said it was a historic day “for Finland, for Sweden, for NATO and for Euro-Atlantic security”.

The accession protocols are now transmitted to the 30 member countries of the alliance for national ratification according to the procedures of the different countries. In the United States, this means that the Senate will have to approve the addition of these countries to the Washington Treaty of 1949.

For decades, Sweden and Finland were content to work with NATO, but did not become members of the defensive alliance. But Russia’s unprovoked attack on Ukraine in February changed the playing field in Europe, and those nations – both historically neutral – have applied to join NATO. At last week’s NATO summit in Madrid, Allied leaders agreed to invite Finland and Sweden to join the alliance.

“Finland and Sweden will make strong and important contributions to our alliance,” Stoltenberg said after the ceremony.

He noted that years of training and exercises together have increased the interoperability of Finnish and Swedish forces with NATO, and that the nations share the same values ​​as other members of the alliance.

“I congratulate all allies for accepting Finland’s and Sweden’s membership applications so quickly, and I would like to thank Turkey, Finland and Sweden for their constructive approach,” said the Secretary General. “The trilateral agreement they signed at the Madrid summit made today possible.”

Finland shares a long border with Russia, and Sweden is just across the Baltic Sea from Russia. There are concerns about actions Russian President Vladimir Putin might take against nations. “The security of Finland and Sweden is important to our alliance, including during the ratification process,” Stoltenberg said. “Many allies have already made clear commitments to the security of Finland and Sweden, and NATO has increased its presence in the region, including with more exercises.”

Signing the document means that Finland and Sweden will have “guest” status and participate in the alliance discussions.

Sweden has a world-class military and will contribute to the security of all NATO allies. “We are convinced that our membership will strengthen NATO and add to stability in the Euro-Atlantic area,” Swedish Foreign Minister Ann Linde said. “We will do our part by contributing to the collective defense of NATO shoulder to shoulder with the other allies.”

Linde said the decision to join NATO has huge support in his country, “and we believe that joining NATO is the best way for Sweden to ensure our national security and protect the Swedish people.” .

Finnish Foreign Minister Pekka Haavisto said his country looked forward to working closely with other NATO allies. “The membership of Finland and Sweden will not only contribute to their own security, but to the collective security of the alliance,” he said.