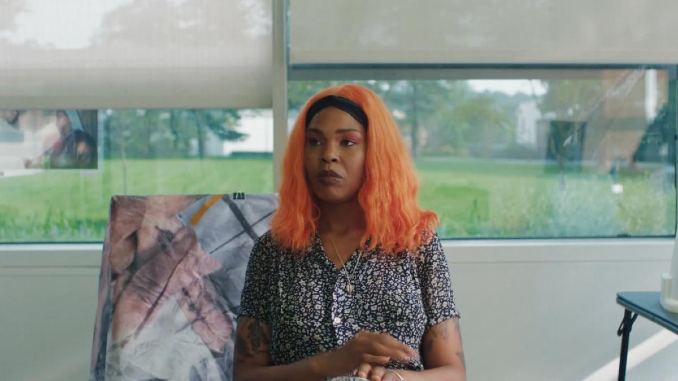 No one is better versed in matters of race than white people, assuming one of two conditions is true: when they outnumber people of color in a conversation, or when in single company of their fellow honkies. Excellent first feature film by Martine Syms The Desperate African opens in media resolution on the first storyline, where power dynamics place Blackness under a white microscope. Palace Bryant (Diamond Stingily) settles in and sits, waiting for the MFA’s thesis committee to meet and render judgment for the final time in his art school run; when they finally arrive, the conversation alternately becomes fluffy, heavy, gnarled, and, in common parlance, problematic, which is just a neutral way of saying “outright racist.” Some members of the committee apparently flatter Palace from the outset. Others speak so loudly that Syms viewers, like Palace, may frown as they mentally unravel the nonsensical dialect to figure out what’s being said. Others still make comments they shouldn’t. Again: racism.

It would be unfair for Syms to say that the whole movie is in that opening scene; there are, after all, about 90 minutes to go once we finish the first nine. But a lot of The Desperate African occurs in these nine, or at least is established in these nine, and, based on your personal experiences, these nine are crucial in defining how you engage with the remaining 90.

“Where do the broken hearts go? reads a flashing caption and you’ll miss it flashing after the film’s opening credits blitz. “Can they find their way back? Palace is in tears, smoking a joint behind a pair of sunglasses, trying to get the better of this committee meeting before starting the first day of the rest of his life. It doesn’t help. Nothing can. All Palace wants is to pack up and get the hell out of Dodge (actually just upstate New York) and rush back home to Chicago. Despite her best efforts to say goodbye to Ireland, Palace can’t leave as she keeps coming across people begging her to stay a little longer. (Luis Buñuel approves.)


The Desperate African note carefully whogets in the way of Palace, and for the most part it’s the white kids. This is probably because most of the students at the school are white, although other black students pop up here and there amidst the whiteness. Still, the school’s atmosphere is mostly mushy. Palace is not repelled by whiteness; his strongest friendship, after all, is with Hannah (Erin Leland). But well-meaning whiteness always has a way of poking its foot in its mouth, like humbly bragging about seeing Moonlight in theaters twice, then lamenting that you would have seen it a third time if you could.

Likewise, Palace classmate Aidan (Cammisa Buerhaus) reacts with surprise when Palace tells him about Jamaican writer Sylvia Wynter. “What if I told you there were black theorists?” reads a flashing Morpheus meme in the upper right corner of the frame. At least the other white student present is also giving Aidan an appreciative look so Palace doesn’t have to do it alone. But this is not enough.


The Desperate African chooses to leave room for joy in a black American experience. The film finds its heart in that joy, and its backbone in everything else: ignorance, naivety, insensitivity and flippant fanaticism, key elements of these experiences, even in the happiest of circumstances. And Palace is, or has reason to be, happy. She has her MFA. She’s only 24 hours away from leaving a place she openly hates. She went to the Venice Biennale, arguably a bigger deal than the MFA. What Syms argues is that Palace happiness is both hotly contested and always in jeopardy in whiteness-curated institutions.

To bridge the gap between Palace’s best and worst last-day-of-school encounters, Syms lands a style that alternates between frenetic and simply lively: one gets the feeling that the movie’s jovial moments could, in no time , gaining sudden friction, and that moments of friction could just as quickly return to joviality. The effect is not unlike whiplash, a condition that influences Palace’s peace of mind day to day, or for that matter, minute to minute. The Desperate African cannot simply be summed up in isolated adjectives. Is it an angry movie? Sure. Is it a bittersweet movie? Absolutely. Is it an ecstatic film? Definitely. Should we also ask ourselves if it is a successful and innovative film? Sym-Packs The Desperate African with a pleasing ingenuity that facilitates its intricate perspective; it’s a movie you have to sit down with to fully appreciate. You might even want to watch it three times.


Boston cultural journalist Andy Crump covers movies, beer, music and being a dad for far too many outlets, maybe even yours. He contributed to Dough since 2013. You can follow him on Twitter and find his work on his personal blog. It is made from approximately 65% ​​craft beer.