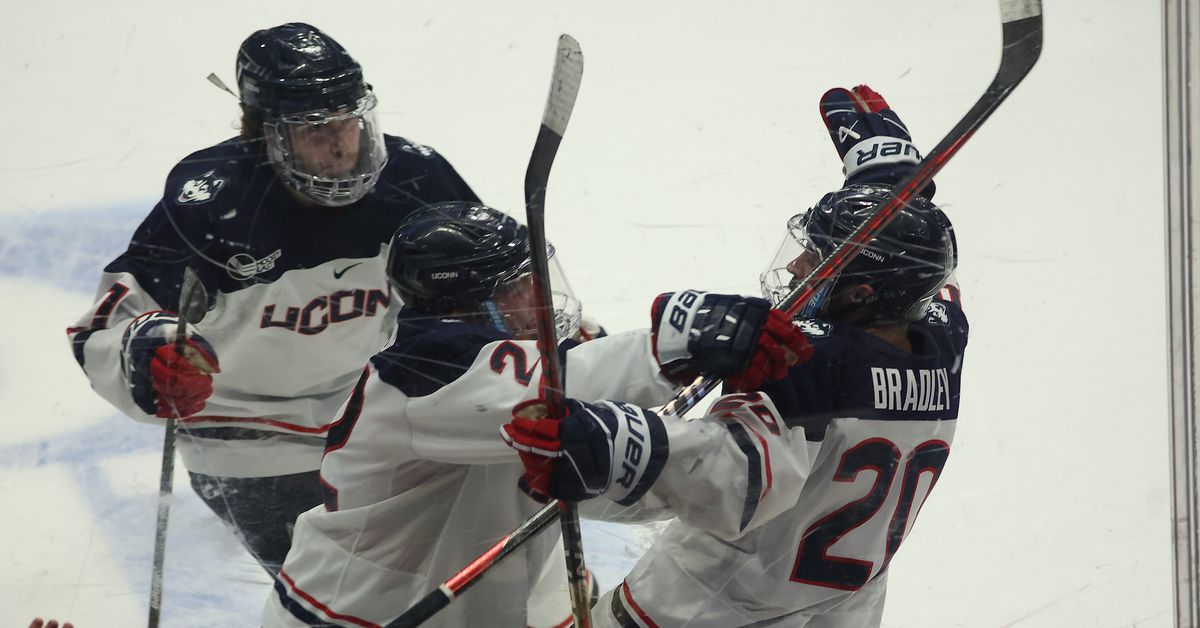 Chase Bradley helped UConn men’s hockey get off to its best start in over 45 years with an overtime winner to lift the Huskies past the Union Dutchmen, 4-3. With the win, they improved to 4-0-0 in the young season, their best start since 1975-76.

After the two teams were deadlocked at the end of regulation and entered extra period 3 on 3, Matthew Wood dropped a pass to Bradley, who deked a defender, skated towards the net and fired a shot past Union goaltender Kyle Chauvette to give UConn the sudden-death victory.

Jake Flynn, Nick Capone, Jake Percival and Bradley all scored as the Huskies erased a one-goal deficit twice to claim the victory. Arsenii Sergeev started in net and saved 27 of 30 shots.

UConn’s special teams dominated again: the Huskies won the battle 3-0 with a shorthanded goal, a power play goal and a 3-on-3 goal.

Union initially appeared to score the opening goal just over two minutes later, but it was ruled out for goalkeeper interference after review. The Dutch would not be denied the first game, however. Midway through the first, Union beat an icing, took the puck behind the net and found Liam Robertson in the slot, who fired a shot from the post to give the visitors a 1-0 lead.

Both teams took that score in the first intermission. Despite 10 shots on goal, UConn struggled to generate dangerous chances in the opening 20 minutes. The best opportunities came late in the last minute when the Huskies splashed the Union net and had a few rebounding chances in front but couldn’t find the finisher.

Fortunately, the break turned out to be just what UConn needed. While shorthanded in the first minute of the second period, Flynn and Ryan Tverberg broke away on a 2 on 1 on the ice. Tverberg grabbed the right side and delivered a perfect pass across the ice to Flynn, who punctuated it to score the Huskies’ first shorthanded goal in two seasons.

Later in the period, the special teams returned. On the power play, Ty Amonte sent it low to Bradley, who attempted a backhand attempt but was denied. However, the rebound found Capone and the junior put him down five holes to give UConn a 2-1 advantage.

The Huskies almost doubled their lead twice soon after. Tverberg had an open chance on the back post to come off the post while Hudson Schandor put a chance on the bottom of the crossbar.

Although UConn dominated for long stretches of the second period, Union found an equalizer in the final minute. The Huskies survived a scramble in front of the net, but the Dutch eventually broke through. With 43 seconds remaining, Cal Mell redirected a Cullen Ferguson shot past Sergeev to level the visitors at 2-2.

Union kept that momentum going in the third period and regained the lead after Ben Tupker completed a rebound in an open net less than a minute. UConn didn’t wait long to respond, however. During a long streak in the offensive zone, John Spetz fired a shot on goal to keep the puck inside the blue line. The long-range attempt found Percival, who tipped it past the goaltender to draw the Huskies even at 3-3.

Neither team found a winner in regulation, so the game went to a five-minute, 3-on-3 overtime period. Once the extra session began, UConn won the face-offs and dominated ownership. On the Huskies’ second shift, Wood took the puck behind the net and without a clear eye on the net, handed it to Bradley. The second buried the winner to give UConn the win and their second straight sweep.

Next, the Huskies host No. 14 Ohio State in a two-game series at XL Center on Friday and Saturday.