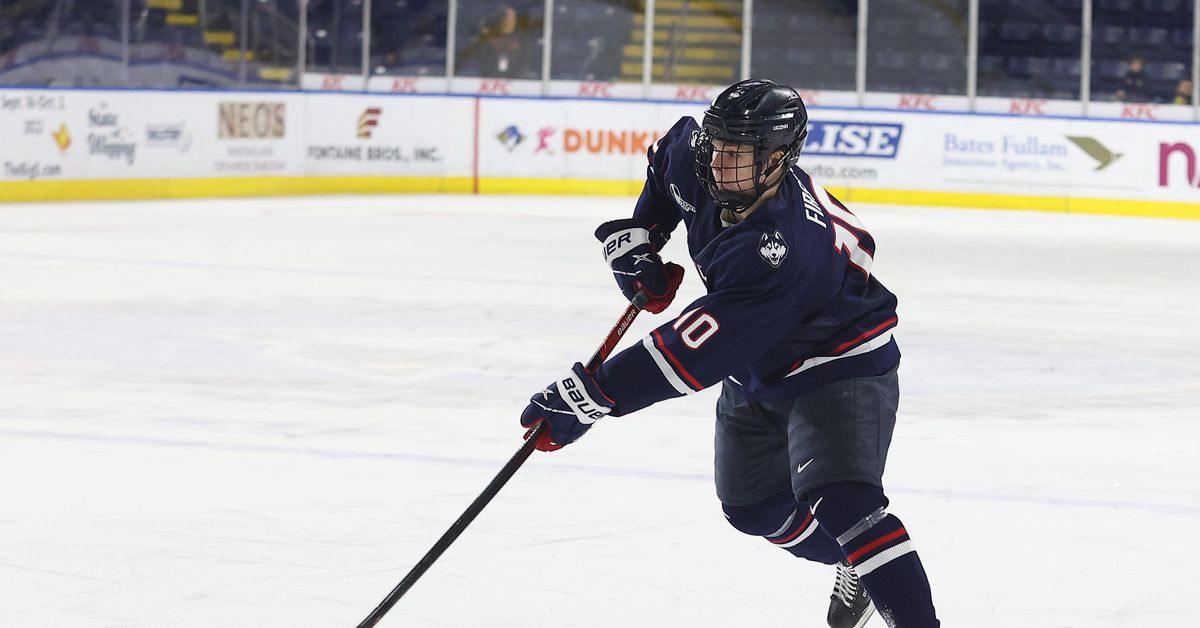 UConn Men’s Hockey advanced to the Connecticut Ice Festival Finals after a 5-1 win over the Yale Bulldogs at Webster Bank Arena. The Huskies were down 1-0 early but scored five unanswered goals through Vladislav Firstov (twice), Kevin O’Neil, Carter Turnbull and Jachym Kondelik to claim victory. Goaltender Darion Hanson made 15 saves.

Yale’s power play entered the game having scored just once in 58 chances and UConn made sure to keep it that way. The Huskies cleared five penalties and even created a few shorthanded opportunities.

Yale benefited from a jerky start from both teams. UConn couldn’t clear the puck in front of its own net and the Bulldogs’ Michael Young used the opportunity to put his team up 1-0 two minutes later.

From there, the Huskies took over. In the first period, they outshot Yale 11-4 and kept the puck in their offensive zone for long stretches. The breakthrough finally came thanks to O’Neil, a former Bulldog.

The graduate transfer took the puck along the boards and fired a centering pass on goal, where Firstov slipped a shot under Yale goaltender Luke Pearson to tie the game, 1-1.

27 seconds later, UConn struck again. Harrison Rees fired a shot from the blue line which went wide of the net but bounced off the boards and found O’Neil at the back post, who sent it into the open net to give a 2- lead. 1 to the Huskies.

The onslaught continued in the second period. UConn won the first faceoff and sent the puck into the Yale zone. Turnbull won a puck battle in the corner and tried to cross a pass. But he was deflected twice – first on the skate of a Bulldogs defender, then on the skate of Pearson – sliding into the net to put the Huskies advantage at 3-1 just 11 seconds from the start. of the period.

A little over a minute later, UConn had a little better luck. Yale’s clearance attempt came off O’Neil’s skate and found Firstov in the slot. The junior curled up and launched a point shot into the string to put the Huskies by three.

The dominance came to a temporary halt after UConn committed three penalties in quick succession, but Yale failed to capitalize. The Bulldogs hit the post and forced Darion Hanson into a hard save on the first, but after that the Huskies created more chances despite a man.

The second period was booked with goals from UConn. A shot from the blue line by Carter Berger caused chaos in front of the net as both teams tried to gain control of the puck. Jachym Kondelik finally caught up to him and fired a backhand shot over an extended Pearson and over the goal line. The nearest official waved the goal first for a high stick, but the call was overruled following a video review.

The third period featured little action, but the Huskies killed the final 20 minutes to earn the comfortable victory.