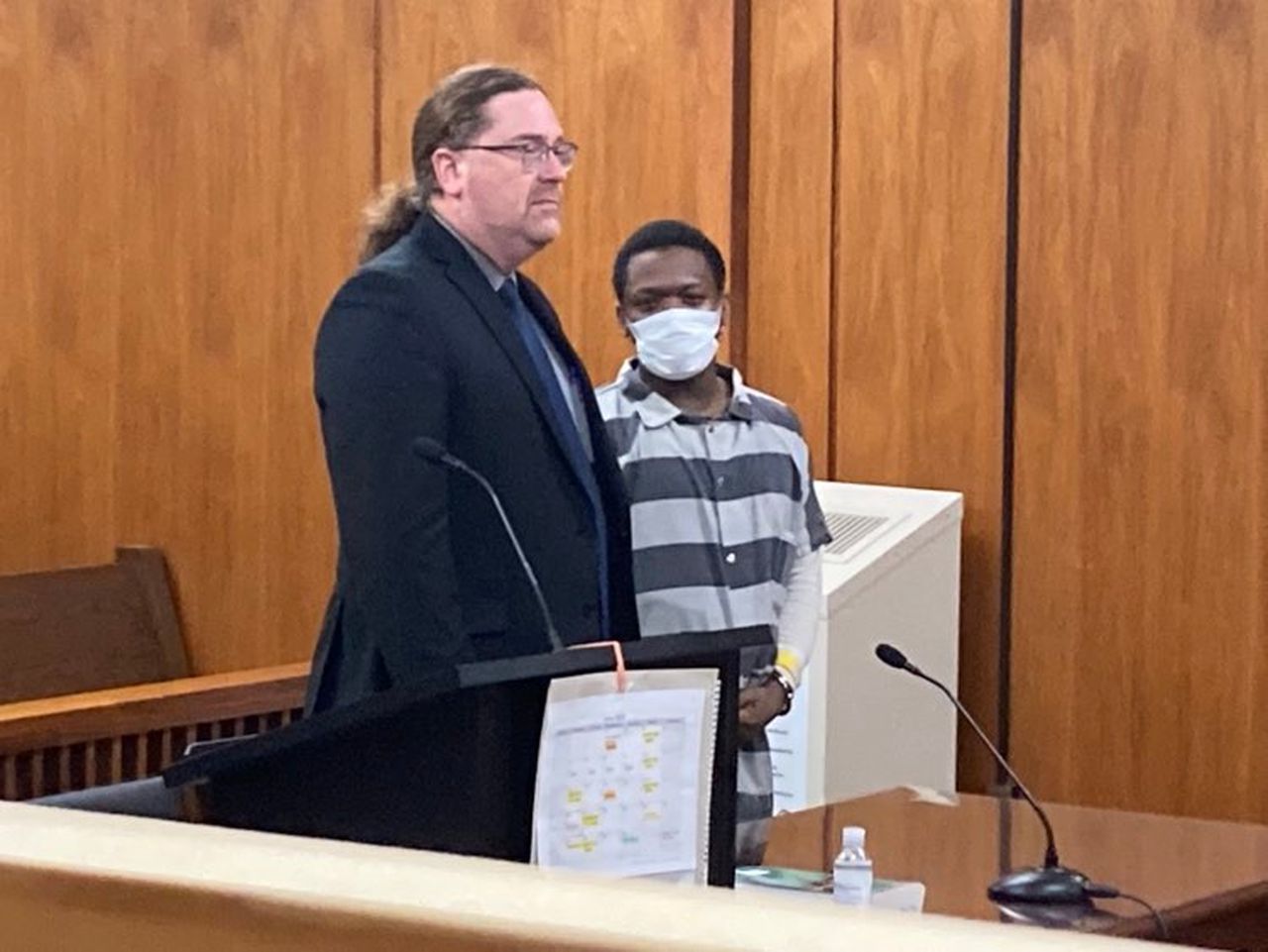 SAGINAW, MI — In a homicide case plagued by witness intimidation, a woman testified that she saw a male relative shoot an 18-year-old man in the parking lot of an apartment complex in Saginaw. The injured man, whom a teacher remembers as a student who had “so much potential”, died a month later.

The preliminary examination of Demontrae C. Hardman, 29, took place on the morning of Friday, June 10, before Saginaw County District Judge Terry L. Clark. Hardman is accused of shooting Izaiah M. “Zae” Danks on the afternoon of April 25 at Birch Park Apartments, 3000 Birch Park Drive, near the city’s border with Buena Vista Township. Danks died of his injuries at Ascension St. Mary’s Hospital on May 24.

At the start of the hearing, Hardman was charged with assault with intent to murder, carrying a concealed weapon, felon in possession of a firearm, felon in possession of ammunition, carrying a weapon dangerous with unlawful intent and four counts of a firearm. At the end of the hearing, the prosecution replaced the charge of assault with intent to murder with an open count of murder.

Before testimony began, Saginaw County Chief Assistant District Attorney Blair N. Stevenson asked the judge to bar the media from using the witnesses’ names, saying several threats had been made against them. The judge granted Stevenson’s request.

Stevenson’s first witness said he and his fiancée were sitting in a vehicle in the parking lot at Birch Park when they heard a commotion.

The man said he saw Hardman walking around the field with a long gun, possibly an M-16. He approached Danks, who was standing near a white Pontiac G6. The two men were arguing, although the witness said he could not tell what it was about.

Hardman fired two warning shots into the ground, although Danks was unarmed, the witness said. Danks began to reach the backseat of the Pontiac just as Hardman approached and shot him five or six times, the witness said.

Stevenson asked the witness what Hardman did next.

“He ran to a silver car, got in and drove off right away,” he said, adding that a woman was driving that car.

The witness said he and his fiancée drove to the Pontiac to help Danks, who was then in the backseat, setting off a car alarm and screaming for help.

“There was blood everywhere,” he said. “We got him out of the car and told him not to move.”

The witness did not know Hardman or Danks, he said. When asked by Stevenson if he had seen the shooter in the courtroom, he identified Hardman as the culprit.

At this point in the testimony, Stevenson abruptly informed the judge that a man in the back of the gallery was recording the proceedings on his smartphone. The man got up and tried to leave, only to be stopped by a deputy. The man told Judge Clark he didn’t know he couldn’t record testimony.

The man said he was deleting the recording but the deputy grabbed his phone at Clark’s direction.

Stevenson then reiterated that there had been severe witness intimidation and death threats in the case.

“We’re going to confiscate this phone and we’re going to get you off the stage,” Clark told the man, who was escorted out of the courtroom.

Cross-examined by defense attorney Jeffrey J. Rupp, the witness said he heard Danks say, “I had nothing to do with it. Shortly after, he heard the first shot, he said.

Rupp asked the witness if he had ever told the police that the shooter had told Danks, “Don’t run into me. The witness denied having said that.

After the witness withdrew, Stevenson called Hardman’s imprisoned co-defendant to the stand. Although the media was not allowed to name her, she is charged with assault with intent to murder, possession of a concealed weapon and felony firearm for her alleged role in the shooting of Danks.

The woman testified wearing shackles and a prison jumpsuit, saying she had briefings with prosecutors and hoped to benefit from her truthful testimony, but was not promised anything specific.

The woman said Hardman stopped by her apartment on the morning of April 25 before leaving for work. At work, Hardman called her, she said.

“He was calling me while I was at work…like he was worried about something,” she said. “Something was bothering him. I could tell by the tone of his voice and the way he spoke.

She believed he needed the money, she said.

Around 3:00 p.m., the woman returned to the Birch Park parking lot. She spoke briefly with Hardman in the lot before entering an apartment.

“After I came out, I saw Demontrae shoot the guy,” she said.

She saw Danks seemingly struggling to get something out of the backseat of the Pontiac G6, only for Hardman to approach and shoot her a few times, she said.

Hardman came running towards her pointing a gun. They and another male relative jumped into a silver car, with the woman driving, she said.

“He was saying, ‘Drive, drive, drive’ and he was banging on the seat,” the woman said. “My instinct was that I was scared, so I just shot really fast. It wasn’t even 10 seconds that all of this happened.

She estimated she was driving at speeds of 80 to 90 mph. She took Hardman to a house, where he apologized to her, she said.

She then overheard Hardman talking to someone on the phone, telling them he screwed up.

“He said, ‘All the guy had to do was give up, give up the money, that’s all he had to do,'” the woman said. “He was just saying, like, he (expletive) got up, and if the guy had cooperated, things would have gone smoothly and as planned.”

In cross-examination, Rupp asked the woman if she hoped the charges against her would be dismissed.

Rupp asked the witness if she remembered telling prosecutors during a briefing that Hardman said, “Drive, drive, I had to do it, he was going to kill me.”

“I don’t know,” replied the woman. “With these declarations, I was pissed off. I was vomiting and I was afraid for my life.

Pressed by Rupp, she said she remembered making that statement.

After Hardman’s co-defendant resigned, another woman testified that she was in a vehicle in the apartment complex parking lot when she saw a blue Chrysler 300 pull up. Two men — Hardman and Danks — got out of the Chrysler and appeared to be in heated conversation, she said.

Hardman got into another car and pulled out a long gun and a handgun, she said. Danks went to the Pontiac G6 as they continued to argue, she said.

Hardman eventually returned the long gun to where he had retrieved it, but he kept the handgun, she said.

“I heard a gunshot go off,” she said. “I hit the ground. When I came back up I saw the guy in black (Hardman) repeatedly shoot down.

The woman jumped out of her vehicle, ran inside, and called 911. She said she didn’t know Hardman or Danks, but identified Hardman as the shooter in the courtroom.

When questioned by Rupp, the woman said she heard Hardman say something like, “I told him to leave me alone.” She also said she did not identify Hardman as a suspect when police showed her a series of photos.

The hearing ended with Judge Clark tying Hardman’s case to the Circuit Court for further proceedings. He is being held in jail without bail.

After Hardman left the courtroom, his co-defendant waived her right to a preliminary review and was also bound. His attorney, Joseph M. Albosta, asked Clark to reduce his bond from the $150,000 it had been set at since his May 13 arraignment.

Clark released the woman on a personal recognizance of $150,000, one condition of which is that she wear a GPS tether.

Hardman was on parole at the time of the shooting, having fled three days prior on April 22. Hardman was sentenced in November 2015 to three concurrent terms of five to 15 years in prison for assault with intent to cause grievous bodily harm.

At the time of his death, Danks was a student at the Youth Development Corporation while pursuing a career as a welder. He also worked at Hardee’s restaurant in Bridgeport.

“Izaiah was a go-getter, hardworking, and loved helping others,” states his obituary. “He was known in his neighborhood as ‘the one you can count on’ to shovel your driveway, mow the grass, clean the gutters or lend a hand with other projects.”

Danks was described as “a selfless young man with a heart of gold who made family friends with everyone he met,” his obituary continued. “When he wasn’t working, Izaiah loved go-karting, playing video games and most importantly spending time with his family. He left his indelible mark on this world through his love and compassion, his innate ability to connect with everyone, and for living a young but truly remarkable life.

Danks’ death was Saginaw’s sixth homicide of the year. Since his death on May 24, five other people have been killed in Saginaw, all of whom died of gunshot wounds.

Three victims were killed in a shooting at 326 S. 11th St. in the early morning hours of June 5. Two people were killed in separate shootings about an hour apart on the afternoon of June 9.

Last year, the city recorded a total of 93 non-fatal shootings and 19 homicides, including 18 with gunshots.

This job pays Canadians to travel this summer and you get $1,000 for every place you rate